Warning: preg_replace(): The /e modifier is no longer supported, use preg_replace_callback instead in /homepages/7/d190887922/htdocs/express-pc/wp-config.php on line 1
 The Next Big Thing In Technology… - Express PC Solutions - Computer Sales - Service - Upgrades

The Next Big Thing In Technology…

The ongoing struggle between laptop versus tablet and Windows versus Android has finally been solved!

Now you can have it all in one portable device…

Two weeks ago at CES 2014, ASUS premiered the Transformer Book Duet (TD300), the world’s first quad-mode, dual-operating system convertible laptop and tablet all in one that allows users to switch between Windows and Android in either laptop or tablet modes with just a single push of the “Instant Switch” button or a virtual key on the tablet.

By offering both operating systems, ASUS provides users the ability to run supported Android applications and a vast array of native Windows applications.

The patented ASUS technology that powers “Instant Switch” offers many performance and productivity benefits over other dual-operating system solutions, such as fast, smooth and seamless switching (a mere four second transition) and the ability to resume each operating system from where the user left off.

Needless to say, it offers everything you would expect from ASUS in the way of Full HD IPS display and true-to-life audio with their SonicMaster technology and two speakers built into the tablet for great sound no matter what mode you’re in.

What really makes this so special is that it’s the first of it’s kind. So, we can except many more of dual-operating system devices to come. Personally, what I would like to see in future devices of this type is an 11″ model with perhaps a built-in flip out stand, similar to that of the Microsoft Surface, to allow free standing when in tablet mode.

ASUS is set to release the Transformer Book Duet in the United States at the end of March, with a price-tag starting at $599 (depending on selected options). 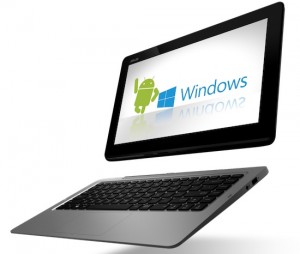